This is the second article in a three-part series exploring low-carbon cement’s potential to decarbonize a critical building material — and the challenges of bringing it to market.

Concrete and cement have helped form the complex and varied built environment of the 21st century. The problem is, the process of producing cement also produces large amounts of CO2 — enough to put the critical climate goals of the 21st century at risk. The production of this one widely used material, which serves as a binding material in concrete, accounts for roughly 4.5 percent of global greenhouse gas (GHG) emissions today and is only projected to increase as urban development ramps up.

As we introduced in the first part of this series, there are several ways that cement’s carbon footprint could be reduced, including by capturing the CO2 from cement production or by limiting the carbon emitted in the first place by modifying cement’s ingredients, chemistry, or production processes. The promise of this latter approach to creating low-carbon cement is that it directly addresses the emissions from the production process and may offer a less expensive route than deploying carbon capture, utilization, and storage (CCUS) technology. But bringing low-carbon cements to market remains challenging due to concerns around the availability of raw materials, cost, user acceptance, and current prescriptive standards that promote a “general purpose” cement.

In this article, we will outline the three main opportunity areas for innovation in low-carbon cement that startups can capitalize on, and the challenges that need to be overcome to bring these solutions to market.

The Three Rs of Low-Carbon Cement

Innovators in the cement industry have opportunities to create lower-carbon cements both through technological breakthroughs as well as through advances in established approaches. Evidence from academic research and commercial demonstrations on a small scale suggests that both of these approaches hold potential.

Any such innovation will need to be assessed against two target characteristics:

In the following sections, we discuss and map the three main opportunities for innovation in low-carbon cement — the “three Rs” of reduce, readjust, and reformulate — against the above target characteristics.

One obvious way to reduce the process emissions from cement production is to use less of its most carbon-intensive ingredient: clinker, a lumpy substance formed by heating powdered limestone and clay to temperatures of 1,400–1,500°C in a cement kiln. This “calcination” process in the kiln releases about 60 percent of all CO2 emitted during cement production. Ordinary Portland cement (OPC), the most commonly used cement recipe, typically consists of more than 90 percent clinker, but this percentage can be reduced by substituting clinker with supplementary cementitious materials (SCMs) or fillers.

SCMs are materials that can chemically react with clinker in the cement, and they include common industrial waste by-products like fly ash from coal-fired power plants and granulated blast furnace slag (GBFS) from blast furnaces for iron and steel production, as well as naturally available materials like clay. Fillers, on the other hand, are materials such as limestone that are inert or weakly reactive with clinker.

Use of SCMs or fillers to replace clinker is not new, and industry awareness of this approach is already relatively high. The advantage of replacing clinker with SCMs or fillers is that it doesn’t require changes in cement equipment or manufacturing processes. Regulations are also growing increasingly friendly toward the use of SCMs — the Netherlands allows producers to substitute up to 95 percent of the clinker in cements.

However, bringing the clinker-to-cement ratio down from 70 to 80 percent today globally to below 60 percent by 2050, in line with the International Energy Agency’s low-carbon roadmap for the industry, is a key challenge. That’s because the most common SCMs used today — coal ash and GBFS — are expected to be less available in the future thanks to the decarbonization of the power sector and changes in steelmaking processes.

But this also presents a massive opportunity. Identification and development of new sources of quality SCMs, including engineered SCMs, can unlock avenues for the industry to achieve the 60 percent target. Cost of SCMs — which can vary significantly based on availability and demand and have a varying impact on cement cost — should be a key consideration for startups. The good news is that the traditional “very cheap” SCMs are no longer very cheap. In fact, alternatives could reduce operational costs by up to US$3 per ton of cement in some cases, resulting in overall cost savings for cement production.

Overall, the Reduce lever remains a key innovation opportunity for startups, and developing new solutions in this space will be key to decarbonizing cement, with the potential to avoid over 400 million tons of CO2 emissions annually. The maturity and familiarity of this approach makes replacing clinker a high-acceptability way to produce lower-carbon cement. With highly available SCMs or fillers, this approach can be very scalable as well.

Rather than replacing a portion of the clinker in cement, another option is to readjust the way Portland clinker is produced to make it less carbon-intensive.

One way to do that is to reduce the amount of limestone in the typical Portland clinker-making process, resulting in non-Portland or alternative clinkers. When subject to calcination in the kiln, this approach reverses the proportion of two calcium silicate materials, alite and belite, in the clinker. Normally, alite is more prevalent than belite, but this approach results in belite-rich Portland clinkers (BPC). This reduces the amount of CO2 released during production as well as the amount of energy required for heating. Further modifications to proportions can result in even greater reductions in CO2 emissions.

The industry already has moderate familiarity with these approaches, as these are normally compatible with existing cement kilns and don’t require significant changes to current process or equipment. The resulting cement product also exhibits properties that are largely similar to OPC. To date, some of these alternative clinker-based cements that are familiar to industry include BPC cement, calcium sulfoaluminate (CSA) cement, and carbonatable calcium silicate (CCSC) cement.

The major challenge with alternative clinkers today is that materials that can partly replace limestone often have limited supply or are used in competing industries, which can impact cement’s cost. This presents a massive innovation opportunity for startups to develop new compositions of clinker using raw materials that ensure cost competitiveness with Portland clinker.

The second way to readjust how Portland clinker is made is to shift away from the traditional heating-based calcination process. Hydrothermal and electrochemical calcination processes are examples of such approaches. While these are in the early stages of research and development and involve a somewhat complex manufacturing process, the resulting clinkers can increase the rate of strength development of cement and emit a concentrated CO2 stream in the exhaust, making the carbon capture process more economically viable. This allows plenty of room for startups to innovate on an energy-efficient calcination process that is not complex, avoids high temperatures, produces fewer emissions, and is cost-effective.

Overall, the Readjust lever will be a crucial short-to-medium term solution for decarbonization of the cement sector until deployment of CCUS technology becomes cost-effective around the world — particularly in developing countries, where most demand for cement will come from in the future. Because some of these Readjust approaches are already compatible with existing equipment and processes, overcoming some of the cost and application-related concerns could help ensure acceptability to industry players and customers.


The most effective way to deal with clinker’s emissions is to reformulate cement recipes to remove it altogether. Alternative binding materials or non-clinker-based cements can, in theory, significantly reduce or even offset process emissions from the cement-making process. Example innovations include alkali-activated binders, geopolymers, and magnesium-based cements.

Historically, the industry’s deep-seated skepticism about the use of alternative binders has presented a key challenge to reformulating cement recipes. In addition, limited data on energy use and costs of the manufacturing process — and concerns about the availability of cheap, abundant, and high-quality raw materials — have prevented any significant activity in this space. For instance, producing alkali-activated binders and geopolymers, which are commercially used at small scale, currently relies on reacting materials like fly ash and slag with an alkali activator. But these alkali activators are not available in sufficient quantities to meet global cement needs. For magnesium-based cements, the availability of magnesium silicate rocks is less of a concern, but the process to develop magnesium oxide-based clinker using magnesium silicate rocks has not been demonstrated at relevant scale.

Overall, the Reformulate lever can deliver carbon-negative cements and can be the long-term solution for full decarbonization of the cement sector. But reformulating cement will require significant investments into research programs and innovative startups to enable the scalability of these climate-friendly alternatives and bolster their acceptability to the industry and consumers.

Developing new cement formulations — based on innovations across reduce, readjust, and reformulate innovation opportunities — will be the key to decarbonizing the cement sector. But while this area holds the greatest potential for startups, there are also significant opportunities to innovate further down the value chain that can reduce cement’s emissions.

Concrete is the leading use case for cement, and therefore interventions in the way concrete is produced or used can have significant impacts on overall emissions from the cement sector. Some of the potential avenues for innovation include:

Startups have the opportunity to offer innovative solutions in this area through development of new chemical admixture materials and use of advanced digital tools and techniques. Use of chemical admixtures – a class of materials that can improve concrete’s performance when used in small amounts — combined with adoption of artificial intelligence and digital tools in cement and concrete production allows producers to optimize cement use by improving the consistency of cement and concrete and predicting the performance of the final product, all while reducing emissions.

Doing this right could allow up to a 70 percent reduction in the use of cement and emissions reductions of up to 67 percent without compromising the strength of the concrete mixture.

And while there has been notable progress in this domain recently, with carbonated concrete products commercially available today in some locations, this approach has a key limitation. Specially designed curing chambers are required to ensure controlled conditions during the curing process, which ultimately increases the cost and restricts the use of carbonated concrete to factory-made or precast products.

This opens up new opportunities for startups to develop novel technologies and new business models that could expand this approach for ubiquitous use in construction. Moreover, if these CO2-cured concrete products are suitably positioned, a green premium is likely to be acceptable among environmentally conscious buyers, including government agencies and corporations with emissions-reduction or net-zero goals.

The Competition Landscape of Low-Carbon Cement 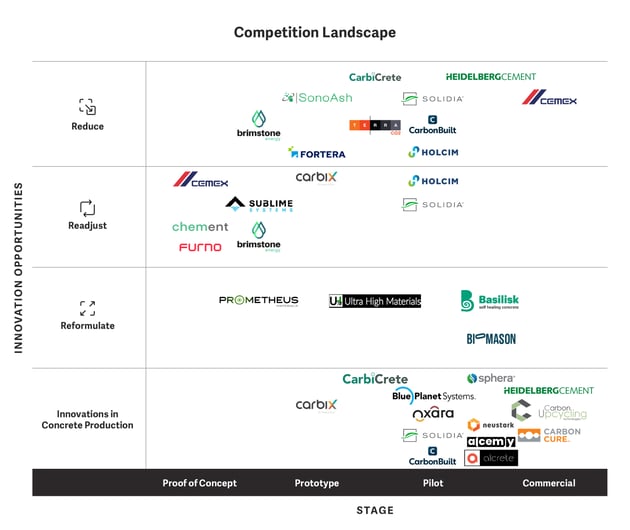 Exhibit 1: Competition landscape across the three Rs of low-carbon cement

The innovation opportunities – the three Rs as well as innovations in concrete production – outlined in this article are already driving significant activity from both startups and incumbents in the cement industry. The competitive landscape depicted in Exhibit 1 above outlines some of the companies working toward low-carbon cement solutions and where they are in the development process, demonstrating the dynamic nature of this emerging field.

A growing number of collaborations between larger players and startups in recent years suggest the industry is starting to take low-carbon cement seriously, which should provide a useful indicator for VCs interested in entering this emerging field.

In the final article in this series, we will discuss how disruptive low-carbon cement solutions can be brought to market and how VCs can help to accelerate innovations.

This is the second in a planned three-part series of blog posts offering expert analysis of low carbon cement's potential. Sign up below to get notified about the next post in the series.